Sen. Cory Booker, D-N.J., tells the NPR Politics Podcast and New Hampshire Public Radio that he would bring a “creativity” to the presidency. 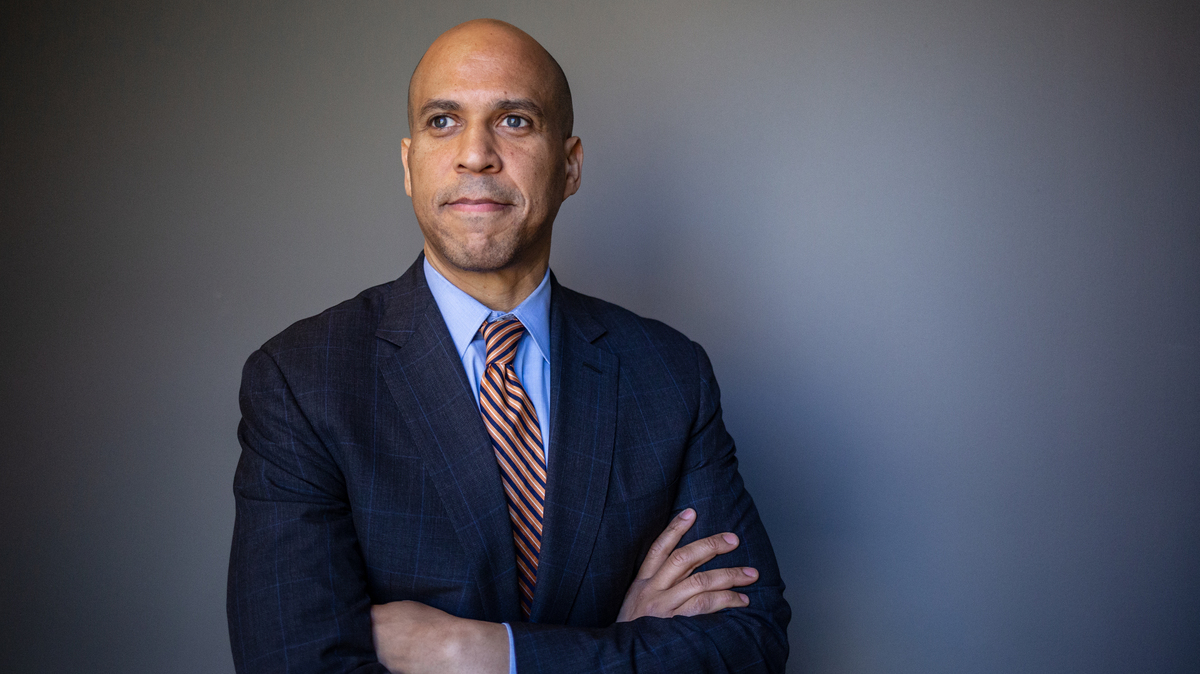 Sen. Cory Booker, D-N.J., tells the NPR Politics Podcast and New Hampshire Public Radio that he would bring a “creativity” to the presidency.

“I hope done are the days that we think some savior is going to come in and be the sole purveyor of hope and possibility,” Booker told the NPR Politics Podcast on Monday in Concord, N.H.

The interview is the first in a series that the podcast will conduct with Democratic presidential candidates, in collaboration with New Hampshire Public Radio and Iowa Public Radio.

The conversation with Booker touched on a wide range of issues: how to regulate social media giants like Facebook, how he could make good on his lofty goals of bringing Americans together – and the Star Trek fanatic’s favorite USS Enterprise captain.

Listen this episode above and read highlights below:

Detrow: When I hear you talk about that revival of civic grace I wonder how you use the presidency to do that, because nobody talked about hope and unity more than Barack Obama. He literally sang “Amazing Grace” in 2015. And yet, after eight years of President Obama, there was an anger and a division in this country that played out in the 2016 election. So what can you do from that position that he wasn’t able to do?

Booker: I am literally sitting here as the fourth popularly elected African-American in the history of the Senate, and the rights and privileges I’m enjoying were fought by people who were told, “You’re moving too fast. You can’t get this done. It’s impossible to pass civil rights legislation.” … But we did not give up.

What we did do was have activists and leaders that were able to inspire the moral imagination of our country to get us to do things we didn’t achieve before. You have just seen a president do the exact opposite, and quite effectively. He’s using the highest office in this land to commit act after act of moral vandalism to do things to divide, demean and degrade us. And he is doing great in the politics of pitting Americans against each other.

And so the flip side of that is, I believe, that the right leaders — plural — because I hope done are the days that we think some savior is going to come in and be the sole purveyor of hope and possibility. What we need is a president that trusts the American people, that works with them and does things to revive those ideals I talked about. But more than that uses creativity from their office like I did when I was mayor, when I had a nation that looked at Newark, N.J., as a place you don’t go to. … That you don’t invest in because it’s decaying. And we turned that perception around.

So I will bring a creativity to the office. Actions that use not just the official powers of the presidency, but ways that you inspire the moral imagination in this country, as presidents did to do things people said couldn’t be done, like putting someone on the moon.

McDermott: So you just put out a multi-part plan to reduce gun violence, and that’s something that we heard you talk about today, in terms of your personal exposure to the consequences of gun violence. That that plan includes a lot of different components. But one of them would be to incentivize states to pass what are called extreme-risk protective orders, or sometimes “red flag laws.” That’s something that we’ve heard politicians in New Hampshire look at. But one of the things that comes up here is people have raised concerns about, how do you balance due process when you put together that kind of a policy. So what do you think about how you would approach that?

Booker: There is a grievous urgency to this that when — my plan is based on not just the personal experiences as the only person in this election, I think, or the only person in the Senate I think that has had shootings in the neighborhood, shootings on their block. There is a personal urgency to this. But the plan itself is actually based on evidence, based on things that we know work. And so when it comes to red flag laws to me, if we can’t find a way to get the details right and surrender on the whole plan because we can’t get the details right, then we’re not going to solve the problem of folks getting their hands on guns that should not have them.

ALSO READ   Rosenstein to meet with Trump in wake of 'wire' report, amid firing speculation

I often hear people who want to quibble on a lot of the details. But we should at least endorse the policy and work on getting it right through the legislative process. And so I imagine, you need to balance due process. I’m all for that, but you cannot have a society where someone who is showing sign after sign of distress, sign after sign of imminent danger to themselves, can go into a gun shop and pass a background check and get a weapon. That’s what I’m trying to get at. I know we can get there.

McDermott: So are there any specific provisions that you think would be really important to have in that kind of a policy?

Booker: Yes … there’s opportunities for judicial review. There should be a process put forward that you to have to go through. I think it should involve law enforcement, I think it should be temporal — in other words, you don’t permanently lose your gun rights. There should be opportunities for appeal. A lot of the substance that we’ve spelled out in general, due process should apply to this.

Detrow: I think a lot of people in America are still adjusting to this governing-by-tweet style of President Trump. But you were really the first politician, in a much different way, to embrace Twitter and to use it to create community to reach out to people. So I’m wondering as you sit here in 2019 — and you probably might have a different answer than you did at the beginning of your mayoral career — do you think that social media has done more harm or good?

Booker: I’m glad you recognized that. We were really early innovators on the platform, and we realized we can go from, you know, e-government, which people talked about, to “we government.” And we really empowered our constituents in Newark not just to drive by a traffic light that’s out but to actually take a picture of it and tweet your mayor. And we actually used it as an efficiency tool and could start driving down the amount of time it took to fix a pothole from, God, when I got to Newark it was maybe weeks if not months to fix a pothole, to literally hours. And I was very proud of how we created more community as you said, bonds that were tighter, where more people were taking responsibility for their neighborhoods. And in that sense social media created constructive social environments.

Detrow: But there’s so much downside. I mean, white nationalism has been reinvigorated …

Booker: Absolutely — not just white nationalism. I’m worried about privacy issues, I’m worried about Russian attacks. They literally, if you if you look at what their insidious aims are — to divide this country, is to make us hate each other, to make us not to trust media. But even this: one’s self-esteem. I’ve seen studies for young kids about what it’s doing to their own views of themselves, of their own worth. And so we need to start having a far more determined conversation about the upside and the downside and learn how to mitigate these issues that are real. And government does have a role.

Detrow: And is that through the Department of Justice, or through … something like the [Securities and Exchange Commission] treating it as a regulated business?

Booker: Well, I think it’s a lot of the above. … I think that we’ve seen with the erosion of net neutrality just all the different people that have touches upon this marketplace. And so yeah, I do think it’s the DOJ, and I do think that this problem we’ve had with corporate consolidation that we need to start taking antitrust law seriously. I do think it’s the [Federal Trade Commission] as well.

There’s a lot of ways that we have to approach this problem, but we right now have a president and an administration that seems to not have an approach and not recognize that this is a problem whether it’s Russian interference or the privacy we all have.

Brexit: MPs vow to vote down May’s withdrawal agreement next month – The Guardian

On Politics: Trump’s Tariffs May Be Here to Stay – The New York Times

EU Elections Primer: How They Work, What Could Happen – U.S. News & World Report